It seems like it was only a year ago we went through all this crass commercialism shrouded in the name of religion. CHING, CHINGA-LING "Aww...Love, Peace on earth, Goodwill towards your fellow man, family values, the sounds of happy children, everything is right and just in the world, Serenity, all this can be had on your bloated, overdrafted, credit card. C'mon down and feel the rapture of 17 aisles of every kind of synthetic Red-suited fat men, tinsel, balls, Angels, glass balls, ribbons, brass balls, Elves, colored balls, Reindeers, shiney balls,[they got alota balls, YUK-YUK] and tons of overpriced, worthless crap that can easily send you into foreclosure by February." That's what they are trying to sell, but are we buying it? Apparently so, or else they would give up. My solution for world peace is... how about we ship millions of 3 foot tall, made in China, glowing from 15-watt light bulbs inside, plastic Santas to our enemies so they can all have this warm an' fuzzy feeling that we allegedly cherish. Surely they will drop their weapons and worship it also. Gee, that was simple, bring on the next problem! You see what the greedy merchants are trying to sell is the illusion of a Spiritual calm through materialistic means. We are heavily bombarded with magical scenes of how we would like it to be, but inside we know it to be false. Like an unhappy ADD child having a Norman Rockwell Christmas morn with the discovery of an expensive "Grand Theft Auto" video game under the tree from you know who [fat Red guy]. Or with just the right gift your spouse/mate will passionately fall into your arms saying "take me now, all is forgotten and forgiven Baby!" Nice ideals, I can see how it is so easy to sell, it's what we are all searching for, the easy way that we can BUY happiness. It ain't gonna happen, the result is that you wind up disheartened and broke! SHHH, don't tell them shyster store owners but it don't cost 'nuthin to truly make someone else feel good, just an open heart, a smile, and your time. And by helping others you get it back tenfold. That's what it is all about, the longest-lasting, real gifts are Love, Compassion, Empathy, or just shutting up and listening to them tell you how they really feel. It's about turning off that incessant idiot box [TV,it is the corporations and the governments tool to control us] and spending some time together! Also give yourself a gift of some quiet time like just admiring nature, it's all around you. It goes beyond a gift, but rather a Blessing. These presents don't cost you a dime an' you don't got to wrap 'em! Revolutionary, isn't it? The concept of a nonmonetary Christmas is how it got started. When Christ and his message first originated it was pure and free, until someone discovered there was money to be made if they could twist it into what it is today. Heck, they even got rid of Him altogether and put some overweight fictional salesman clad in red [makes you think, hummm... who else is the same color?] as the iconic symbol of the season. We can't change it [too far entrenched], just lessen it a bit if possible. So instead of that big hunk of Zirconium crystal on a useless ring or something that will replace your presence like the latest video game system, give them a gift certificate of maybe at least an hour a week of your time doing whatever they would like to do with you, I believe that gift is priceless! Okie-Dokie on to Zzen news; I was at the fall swapmeet so I missed the meeting [again]. I tried calling around to find out the jist of it an' no one is talkin'. I guess they know what's good for 'em iff'in they do blab anythin'. Down in the holler is dark an' cold, 'an you don't want to find out how dark 'n cold it is when yer buried there...ALIVE!! Be afraid, be VERY afraid!! You'll be ok as long as you keep yer mouth shut! Saw some of them Zzen cretins skulking around the parts [can't say who, of course] seein' what could be fashioned into a weapon of some sort. Others around the swap meet were some really scary, ruthless people, made us seem like girl scouts! The baddest of them all was a, are ya sittin' down, ... LAWYER/POLITICIAN!! OH GOD Save the 'ol Ladies and the Babies!! RUN, RUN, Save yourself!! My Daddy said we should line a hunnert of 'em against the wall, shoot 99 of 'em and maybe the last one will straighten up!! What do you call all of 'em up to their necks in cement?....Not Enough Cement!! What's the difference between a lawyer/politician and carp?....One's a bottom-feeding scum sucker and the other's a FISH!!! Now, now, now don't get yer politically-correct nickers in a knot, I'm just joking around. You know when I'm joking?... My lips are movin'!! An' I think I've flapped my jaws enough for this installment so till next year....HOOTIE-HOOT, Wiz 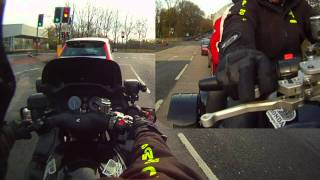 Rick's Shop As It Was